2Aston Hill’s Black Run entered into downhill racing folk law on Saturday 6th September 1997 when the Southern Area Mountain Bike Series (SAMS) came to Aston Hill for the final round of the 97 race series. Wendover Woods had originally been proposed as the location for race in May of that year but with Wendover Woods criss-crossed by a myriad of public footpaths Aston Hill was sug 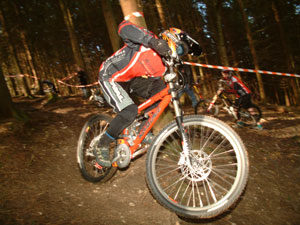 gested as an alternate venue. With the Series organiser Stewart Sidebottom looking to promote both the Downhill and Cross-Country races, Aston Hill originally didn’t look like it was going to cut it as a venue.

Aston Hill was one of the first purpose built mountain bike trails in the UK created in 1992 to relive the pressure of the influx of mountain bikers to Wendover Woods following the successful early mountain bike races in 1989 and 1990 with the woods playing host to a round of the British Mountain Bike Series and the finals of the 1990 Marin Bikes Series. The 2 mile trail on Aston Hill couldn’t really compete with the network of forest roads and trail in Wendover Woods and it was certainly to short to host a round of the Southern XC Series which were looking for circuits from 5 to 7 miles to race around. 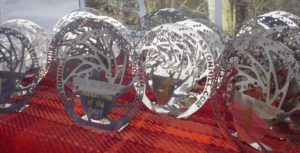 In a twist of fate some of the local downhill racers had already started to cut an unofficial downhill trail down Aston Hill’s steepest slope. Mark Davies, Steve Goode, Rob Munn and a number of other locals were using it for training and had scratched a rough line out on the hillside. After seeing the potential Stewart Sidebottom didn’t take a lot of convincing that the downhill had found a new venue and with the Cross-Country layout set to really test the riders the race was moved to be the final round in September and work began to get Aston Hill ready to host its first Mountain Bike Race.

Build days were organised and the Black Run evolved into a ribbon of track winding its way from the highest point on Aston Hill down to the lowest point of the hill and the bottom of a geological feature known as Daniel’s Hole. As a downhill it track had a bit of everything fast and flowing at the top to steep and technical in the middle with enough twists and turns to bring out the best of the best in the racers from across the South of England 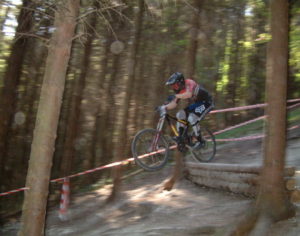 The Black Run wasn’t really ahead of its time but it was a real challenge for the bikes that were cutting edge in the late nighties and it was certainly one of the steepest and most demanding downhill courses in the South of England. Downhill Bikes were evolving fast and the Black Run was a track that was going to put the best to the test. 20 years on the Black Run is still putting riders and their equipment to the test as it evolves and ages with the sport of downhill.
The route of the track isn’t far of the one it follows today but the evolution of the track and the surface wear has seen the track wear through from the deep loam it started out with to the chalky gullies and rooty drops that it’s known for today. When people see the pictures of the early track they often can’t
believe they are looking at the same section as time, tyres and water have dramatically shaped the landscape over the years.

Sorry, no Tweets were found.